Debuggers are interactive dynamic analysis tools that are used to inspect your code as it runs.

Even if you’ve never used a debugger before, chances are that at some point you’ve debugged your code by using print statements to check the contents of your variables at different points throughout your program (Also called “printf debugging”). If you find yourself doing this often, however, it’s usually more efficient to learn how to use a proper debugger.

Web Consoles are useful tools built directly into your browser for debugging and modifying website HTML, CSS, and Javascript on the fly.

You can access the web console (which is the javascript-specific part) using the following commands: 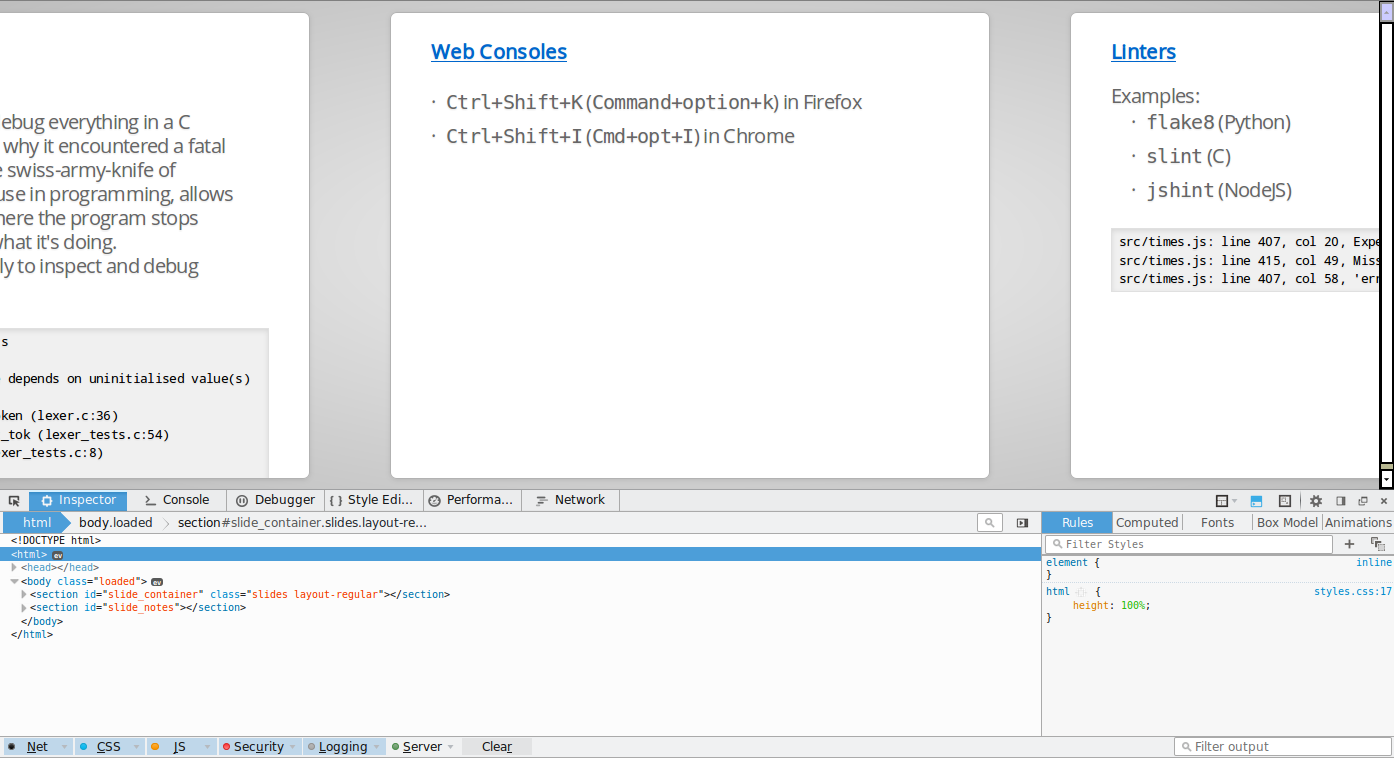 Linters inspect your code and flags suspicious usage. This can be to enforce a style guide or to flag code which will probably not compile or break the program when it is running.

Code Coverage is the process of running your tests and keeping track of which lines, logic branches, and files are used in the test suite. Code coverage programs keep tabs on the lines of code (or not run) in each of your tests and outputs a report showing a percentage of your codebase that is run during the test suite, as well as a more detailed list of which lines, methods, and logic-branches are tested in your suite.

This is useful because it demonstrates how much your tests are actually doing (proving your program does what it should) and proves if you’re carrying around a bunch of dead code. In general a good target-coverage is 80% of your code should be tested in your test suite. 100% coverage is all but impossible.

IDEs are programs used to help developers get their job done by integrating many essential tools into one ecosystem.

Most IDEs act as a debugger, text editor, linter, syntax hi-lighter, and even a version control GUI. These are useful features to combine into one; instead of learning many tools you only need to learn one, largely click-button-based tool.

IDEs can also drastically simplify a complicated ecosystem by tracking dependencies and hiding boiler-plate code from the developer. In Java it is almost unheard of to program without an IDE because setting up source code by hand is so tedious and error-prone.

Code is read much more than it is written. If we assume this is true then we can conclude that it’d be nice for our code to look good, or at least be consistent (a book is hard to read when it keeps changing tenses and time-line)

Style Guides are rules for formatting your code in a consistent way. This is to avoid differences in aesthetic as well as functional style of a program. They are always a nice thing to have for larger projects and are absolutely necessary for projects with large teams of contributors.

Style Guides, when enforced correctly, make the code-base of a project more readable and understandable. Instead of formatting blocks in a mish-mash of ways and designing functions sometimes do one thing or sometimes do many things the code is consistent and easier to manage.

The Linux kernel style guidelines are actually fun to read:

“First off, I’d suggest printing out a copy of the GNU coding standards, and NOT read it. Burn them, it’s a great symbolic gesture.”

NASA’s Jet Propulsion Laboratory style guidelines are very short and are concerned with automated tooling to do code analysis:

“All loops shall have a statically determinable upper-bound on the maximum number of loop iterations.”

Dependency isolation is the process of – wait for it – isolating the dependencies of a project. This is a surprisingly hard problem and many consider it largely unsolved.

The root of the issue is that you might be developing two programs: FooFOSS and BarEnterprise. They both depend on the library bazUseful but one depends on version 1.1.7 and the other depends on the more stable 1.0.1a. You can’t just install the most recent one and call it good, you’ve got to figure something else out instead.

The way Python handles the issue is with Virtual Environments (venvs). Venvs should not be confused with Virtual Machines which are completely different.

You have to activate a venv to be inside the venv. Once you have done that your environment is told “When you want to use this library, look in this directory only.” Then all of your dependencies are placed in that directory thus isolating your dependencies.

It isn’t a perfect system but it works for the Pythonista ecosystem and hasn’t been replaced yet.

Setup and enter the virtual environment.

Install a package. This installs it in the current working directory and so does not ask for root permissions.

Many other languages attack the dependencies issue in smarter and less smart ways. Whether each solution is more or less intelligent than the others is a popular topic for both friendly and unfriendly debate over the internet.

Node.js:
Creates a node_modules directory and tracks dependencies in package.json.
Go:
Dependencies are tracked via git repositories and using the go get command.
Rust:
Dependencies and versions are specified in Cargo.toml. All compiled code (and dependencies) are stored in a target directory.

A Carbon Copy of the Production Environment(s)

Development servers are used to test that your code works in a real environment, with a real server, and real data. You shouldn’t throw your code up on a production website to see if it works, so a development server is as close to the real thing as you can get.